Ever since David Attenborough’s escapades with mountain gorillas in Life on Earth, people have been fascinated by the prospect of an intimate get-together with our distant hairy cousins. A primate watching holiday, however, is no chimps’ tea party. Physical contact is forbidden in order to minimise the risk of passing on our germs. Then there’s the sad reality that, following years of persecution, most wild primates are extremely wary of humans. Couple this with the fact that they often inhabit thick forests and you’ll begin to wonder why primate watching has become so popular.

Few other animals display such a captivating and familiar range of behaviour and expressions. Make brief eye contact with an orang-utan or a gorilla and you are connecting with another mind. It’s a sobering and privileged moment that we’re more than happy to slog for hours through humid, muddy jungles for a chance to experience.

Remove humans from the picture and primates are mostly found in tropical and subtropical forest and woodland throughout Latin America, Africa and Asia – the introduced Barbary macaques of Gibraltar being their only toehold in Europe.

The prime sites for mountain gorilla watching are Bwindi and Mgahinga in Uganda and Volcanoes National Park in Rwanda where several families have been habituated. Chimpanzees can be spotted in forest reserves throughout East and West Africa, including Kibale in Uganda and Mahale Mountains in Tanzania. Africa is also home to common primates like baboons and vervet monkeys, which you’ll more than likely see on a typical safari. For lemurs, however, you will need to plan a trip to the island of Madagascar.

The world-renowned Kabili-Sepilok Forest Reserve in Sabah, Borneo, provides an opportunity for close encounters with orang-utans, while a boat trip on the Kinabatangan River often reveals proboscis monkeys. New World primates, which include the diminutive marmosets and tamarins, are perhaps more elusive, although you can’t fail to miss the cry of a howler monkey.

There are thought to be around 634 species of primates – a precise figure is surprisingly elusive, partly due to taxonomists being undecided as to whether certain closely related varieties should be considered separate species, and partly due to the fact that new species are discovered all the time. Since 2010, the primate family tree has blossomed with discoveries of a new snub-nose monkey in Myanmar and a fork-marked lemur in Madagascar. Our knowledge of lemurs has grown in leaps and bounds over the past 20 years, with the number of species known to science climbing from around 30 to over 80.

Sadly, however, time is running out for our closest living relatives. Around 48% of all primates are classified as threatened with extinction on the IUCN Red List of Threatened Species. Major threats include habitat destruction and hunting – both for food and the illegal wildlife trade. Urgent conservation measures are crucial, but carefully managed responsible tourism projects could also throw many primate species a lifeline.

What is the Primate Watching Code of Conduct?


How do you photograph primates?


Where can I see bonobos?


Where can I see snow monkeys?


Where can I see howler monkeys? 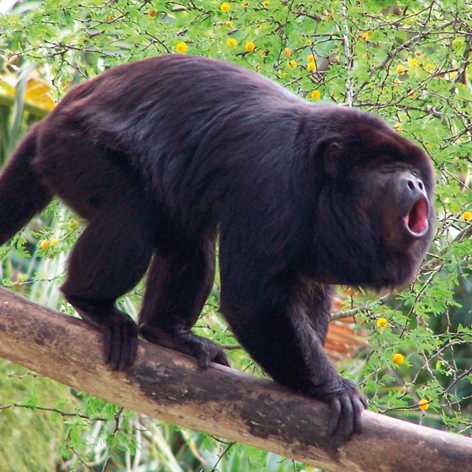 In the Midst of Mountain Gorillas

How to Track Apes and Monkeys in the Wild

27 Places to See Primates in the Wild

HOW TO BE A RESPONSIBLE WILDLIFE TRAVELLER

When it comes to wildlife holidays, responsible tourism is not just an option – it should be considered an intrinsic part of the whole process. When planning your gorilla tracking or primate watching holiday, read these 10 steps to minimise your impact on the environment, reduce your carbon emissions and support wildlife conservation and the livelihoods of local communities.

0530: Wake-up call (that’s for you, not the gorillas – they’re probably still napping in the forest).

0600: Tea and a light snack at your lodge; drive to the national park HQ. Don’t forget essential kit: walking boots, waterproof jacket and trousers (or gaiters), gardening-style gloves to protect against stinging nettles, binoculars, camera gear, water bottle and a few US$10 notes for hiring a porter and tipping your guide.

0700: At the park HQ, check that your permits are in order and wait to be assigned your gorilla group (you may be able to choose one depending on your preference for a short or long hike). Maximum of eight people per group.

0730: Briefing at park HQ with your guide during which you’ll learn about the family structure of your assigned troop, and some general mountain gorilla facts.

0745: Short drive to the forest access point nearest to your gorilla group.

0800: Meet your porters. They can be hired (usually for around US$10 a trek) to carry your daypack. Walking sticks are often available too.

0815: Start walking. Sometimes you’ll hike straight into forest, but often there will be a short stroll across farmland to the park boundary.

0845: Before entering the national park your guide will give a second briefing, on gorilla etiquette. Now is the time for anyone with a cold to confess and go back – human viruses can be lethal to gorillas. Remember, too, that no food must be taken into the forest.

1100: Meet the scouts that located the gorilla family at daybreak and have been updating your guide by radio on their movements. Speak softly, if at all; leave your daypacks and walking sticks with the scouts; ensure that your camera flash is turned off, then follow your guide towards the still-hidden gorillas.

1110: Your allotted hour with the gorillas begins. It passes quickly, so be sure to lower your camera occasionally to savour the atmosphere, sounds and smells. Always be alert to your guide’s instructions. He or she will be constantly judging the gorillas’ mood and behaviour.

1210: Your guide ushers you away; remain silent until you are well clear of the gorillas.