Manu, Peru: My Brother and Other Animals

It was almost as if a door had closed behind us. One moment we were driving in brilliant sunshine across the arid flanks of boulder-strewn mountains, trailing dust across the high-altitude puna. The next we were descending through cloud that parted occasionally to reveal a gravel road, unravelling through thickly forested valleys like a wayward strand of dental floss. From a 3,500m pass, high in the Peruvian Andes, we had traced the road eastwards until it was snuffed out by the misty expanse of the Amazon rainforest, lapping at the mountains like a green tide.

As our minibus burrowed through the botanical mayhem of the cloud forest, our guide, Percy, swiftly added another seventy bird species to our list. It was still only a fraction of the 1,000 species (around 10% of the world’s total) that are found in Manu Biosphere Reserve. Covering an area roughly the size of Wales, it is not unusual for a single hectare of rainforest here to support over 200 different trees. Add to that a similar variety of mammals and an ever-increasing inventory of reptiles, amphibians and insects, and you have the ultimate wildlife hotspot – more diverse than anywhere else on earth. To reach the heart of this Eden, however, involves a three-day overland journey from Cusco, Peru’s adventure staging post.

“So, Percy,” said Simon, as we reached our first night’s stop – a small wooden lodge snug in the cloud forest. “What’s out there that could kill us?” At barely five-feet tall, Percy was a good foot-and-a-half shorter than my brother. His impish face took on a particularly mischievous glint when, halfway through enthusing about deadly snakes, like the fer de lance and bushmaster, he was interrupted by a piercing shriek. “Don’t worry,” he smiled. “That’s just a bamboo rat – this big.”

”There are rats the size of cats here,” said Simon, as we retired to our cabin, the beam from his torch chasing shadows through the forest. It has to be said that my brother was far more excited about our actual journey than the wildlife tick list I had started compiling with Percy.

At 5am the next morning it was still dark. Percy wanted us in position well before one of Manu’s most extraordinary natural spectacles began. After a short walk, we huddled into a thatched hide and waited. A hint of pre-dawn light began seeping through the trees when we heard the first flutter of wings. “There’s your cock-on-the-rock,” murmured Simon next to me. “Cock-of-the-rock,” I whispered back. As the daylight strengthened, I began to make out the alpha male perched on a branch just a few feet from where we sat. Suddenly he uttered a wonderfully hysterical cry, like something you’d expect from an inebriated chicken, and immediately the lek sprung to life. Male cock-of-the-rocks, resplendent in their viridian and black plumage, flocked to the arboreal arena to woo females by hopping from branch to branch, whirring and clucking, and chasing off rivals.

Male cock-of-the-rocks, resplendent in their viridian and black plumage, flocked to the arboreal arena to woo females by hopping from branch to branch, whirring and clucking, and chasing off rivals.

By 6.30am the show was over. Hummingbirds, mot-mots and tanagers took over from the dawn shift as the cloud forest settled into its daily routine. I’m not sure if Simon had been impressed or not, but later that morning, as we continued our descent into the Amazon basin, I did catch him flicking through one of Percy’s bird books.

After two hours, the track finally emerged from the hills into an area of sparse settlement (Manu’s cultural zone), where the forest edge gave way to random plots of banana, manioc and coca. At Pilcopata, a jungle-frontier village on the Alto Madre de Dios River, we stopped for warm beers and a chance to stretch our legs. Outside it was ninety in the shade, with humidity to match. Occasionally an old truck with wrecked suspension trundled past, or someone would shuffle across the settlement’s single, dusty street. Pilcopata was like something out of a Mad Max movie. There were even bottles of pickled snakes at the local bar.

Simon was in his element. When we took a canoe across the river at nearby Atalaya and found a 1967 Land Rover waiting to transfer us to our next lodge, he could barely contain himself. “Look, it’s even got the original Solihull badge on the back!” With wires hanging from its dashboard like the entrails of a decapitated animal, the Warwickshire wonder fired first-time and jolted us a mile or so to the converted homestead of an old tea plantation.

Located at the transitional zone between mountain cloud forest and lowland rainforest, Amazonia Lodge is one of Manu’s wildlife honeypots. Simon was settling into “colonial mode”, relaxing on the lodge’s wide, mahogany veranda with its views across hibiscus-spattered lawns, when Percy hauled us off on a jungle hike. Within minutes, we were tripping over buttress roots and stumbling through spiders’ webs as we tracked squirrel monkeys flitting through the canopy, 90ft above our heads. Then Percy led us up a rickety tower for a monkey’s eye-view, gazing across the treetops of the Amazon.

The next day we headed to the river. At the road’s end we traded minibus for boat and set off downstream, our helmsman cutting the outboard as he steered through shallow rapids or negotiated skeletal trees toppled from the riverbank during wet-season floods.

After six hours we reached our final lodge, where we would be based for the next few days. A cluster of thatched cabins cowering beneath the soaring trunks of rainforest giants, Manu Wildlife Centre is located near several of the reserve’s prime wildlife-watching sites – most famous of which is the macaw clay-lick. 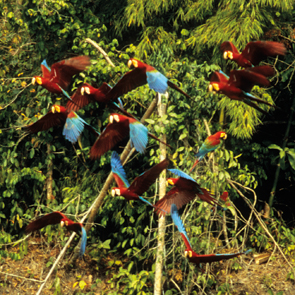 “What is it about this place that you always have to get up in the dark,” muttered Simon as we clambered back into our longboat early the next morning. A short distance downstream, we pulled ashore and walked to a hide overlooking a low, sandy cliff eroded in the riverbank opposite. As sunrise enflamed the forest canopy and sent tendrils of mist squirming across the water surface, we noticed something odd about the trees. Several of them were bare, and what we’d originally mistaken for leaves were actually parrots – hundreds of blue-headed, orange-cheeked and mealy parrots. Like a stained glass window exploding, they simultaneously took flight and streamed overhead, their whirring wings and high-pitched squawks shattering the predawn calm. As the parrots settled on the riverbank and began nibbling the clay (which, according to Percy, helped absorb toxins in their fruity diet), the first macaws arrived, their raucous cries adding to the avian hullabaloo. Like fairy lights on a Christmas tree, the vegetation overhanging the riverbank became daubed with red, yellow and blue as a hundred or more scarlet macaws joined the noisy, colourful ritual.

Like a stained glass window exploding, they simultaneously took flight and streamed overhead, their whirring wings and high-pitched squawks shattering the predawn calm.

“It was a lot of parrots, that’s for sure,” said Simon, trying not to appear too moved. I’ll make a twitcher out of him yet, I thought, as we headed back to the lodge.

Percy suggested spending that night sleeping rough in the forest. A two-hour walk led to a raised wooden platform overlooking a trampled clearing that Percy told us was frequented by tapirs – a largely nocturnal mammal. Sitting on mattresses draped in mosquito netting, we ate our packed dinners and waited in silence.

Night fell quickly. The techno-babble of cicadas, frogs, owls and nightjars built steadily, each creature doing its best to imitate a digital alarm clock. Not that sleep was possible. Percy switched on his torch (muted by a red filter) and the macabre light picked out several large shadows fluttering above the clearing.

“Vampire bats,” said Percy. There was a long pause. Then I heard Simon exhale.

“Percy, did you just say vampire bats?” he whispered hoarsely.

“Yes, the big ones.” There was something disturbingly frank in the tone of our guide’s voice.

I heard Simon fidgeting with his mosquito net. No doubt, like me, he was wondering if it was fang-proof. Then Percy flicked off the torch and plunged us into darkness again.

After three hours trapped in our ghostly cocoons by circling vampires, and with not so much as a sniff of a tapir, we gave up and decided to return to the lodge.

Ironically, we saw two tapirs bathing in the river the following morning. It was a fortuitous start to an excellent final day in Manu. Hiking to a nearby oxbow lake, we spent hours paddling a dugout canoe through pristine rainforest reflections, pausing to watch jacanas tiptoe over lily pads or howler monkeys feed in the surrounding forest. We even spotted a three-toed sloth in a fig tree. Apparently, it had been there for two months, hunched over a branch like a hairy hermit in solitary contemplation.

We even spotted a three-toed sloth in a fig tree. Apparently, it had been there for two months, hunched over a branch like a hairy hermit in solitary contemplation.

Simon was in an equally calm state of mind. When Percy told us that the fish jumping nearby were piranhas, he seemed totally unfazed. Suddenly, there was a commotion overhead as two large, gaudy birds flew across the lake. Simon traced their flight with his binoculars.

“Looks like a pair of blue and yellow macaws,” he said, smiling to himself.